One less commonly known plague of antiquity is the Antonine Plague (165-190 Common Era [CE]). According to some historians, the Antonine Plague spanned the entire Mediterranean region, killing between 10-50% of the Roman Empire. The Roman Emperor, Lucius Verus, and his co-regent Marcus Aurelius are two of this epidemic’s purported victims. Some historians even assert that it crippled the Roman military, leading to the end of Pax Romana.

In his recent seminar at the National Socio-Environmental Synthesis Center (SESYNC),  historical epidemiologist, Professor Tim Newfield, counters this “maximalist” or extreme interpretation of the Antonine Plague with a more nuanced argument. He asserts that this epidemic was not the mass source of mortality as has been previously described. As an Assistant Professor in the Department of History at Georgetown University, Newfield uses collaborative and interdisciplinary approaches to bring new evidence into discussions of the deep past (1st millennium CE).

Newfield suggests that the exaggeration of the Antonine Plague’s impact is a product of two issues. The first issue is how historians incorporate (or fail to incorporate ) the latest evidence from other disciplines. For example, while there have been new advances in climate science surrounding a climate event in 6th century CE, many historians continue to cite the same paper from over a decade ago. Unfortunately, he said, historians may pull studies from other disciplines into the historical realm but decontextualize them in the process. While Newfield has supplemented his own historical interpretation of primary sources with the latest pollen, genomic, and archeological data, he notes that it is imperative to work with interdisciplinary colleagues who can provide their expertise. Newfield stated that, “solely through an interdisciplinary framework can historians make historians relevant to contemporary frameworks.”

During his seminar Newfield traced three waves of maximalist historian interpretation surrounding the Antonine Plague. In the final maximalist wave originating in the 1960s, he said historians shifted the narrative to argue that the Antonine Plague was likely a smallpox outbreak that led to 10 million deaths.  Newfield offered several counterarguments. Much of this hypothesis relies on tax documents from the Roman Province of Egypt, which detailed a declining tax base. Newfield notes that this single locale was taken as a template or substitute for other parts of the empire, but that historians should not assume that such local or regional patterns are universal.  External factors like a large volcanic eruption in the region could also have been at fault. Also, more recent molecular studies suggest that smallpox likely emerged several hundred years after the observed outbreak. Although the evidence is not rich enough to pinpoint a definitive alternative diagnosis, Newfield said, “By pointing out the errors in the approaches that have been taken so far, I think there is value in that.”

On the relevance of historical disease research to modern disease research, Newfield pointed out that often our conceptions of disease are based on assumed common knowledge rather than detailed scholarship. These assumptions then inform research and funding agendas. Newfield also points to the role that historians can play in synthesizing datasets that are of use to disease researchers.  Newfield said, “Historians can bring their skillsets to the table and construct long-running [time] series.” In turn, historians can learn to ask better questions. Newfield stated that, “more historians should be engaging with academics outside of their field.”

SESYNC holds a Seminar on Tuesdays throughout the academic calendar year. For more information about the Fall 2019 lineup of speakers, please see our schedule.

This year I’ll be serving as a Research Scholar for TEDMED 2020!

The TEDMED Research Scholars are a carefully selected group of passionate and objective individuals whose expertise spans the biomedical, public health, and emerging technology spectrums. Every year, Research Scholars help us to vet the science and timeliness of our TEDMED Speaker nominations, allowing us to better examine the diverse nominations we receive.

This year the EEID conference was held at Princeton University from June 10-13, 2019. The four guiding themes were:

This year I tried something different for note taking: I brought my digital pad and creating conference doodles. Conference doodles are a science communication tool that link the  material of the talk with illustrations. I found this was a fun way to keep my attention focused and to practice condensing the material into salient takeaway points. It was also really fun to draw mosquitoes, spirochetes, aphids, and other sundry pathogens and vectors. 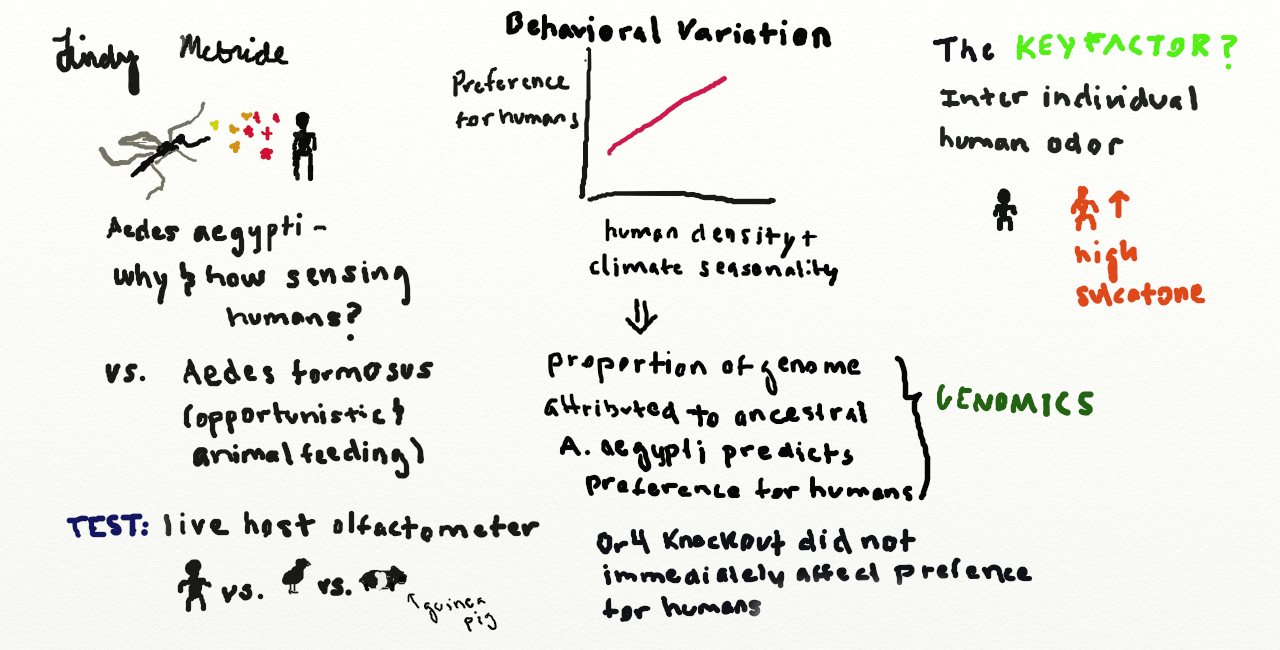 END_OF_DOCUMENT_TOKEN_TO_BE_REPLACED

In order to predict and fight animal disease outbreaks, epidemiologists and other researchers need to understand how a given disease spreads through landscapes and populations. Factors contributing to the ability of a pathogen to spread include the features of the environment as well as the movement of the animals through that landscape. Human activity is changing landscapes, with the result that they are becoming increasingly heterogeneous (with differences occurring across the landscape). The effect of this increasing heterogeneity on the spread of disease is unclear…

Fragmentation of landscapes and habitat loss—driven by urbanization and climate change—can put wildlife species at risk of extinction. Some ecological theory suggests habitat fragmentation may be beneficial to wildlife facing disease because populations of sick animals may remain isolated from healthy populations or dispersal might allow healthy animals to escape infection from otherwise sick populations.

A new study surrounding the topic, proposed by University of Minnesota Ph.D. student Lauren White in the College of Biological Sciences; and her advisors, James Forester, College of Food, Agricultural and Natural Resource Sciences, and Meggan Craft, College of Veterinary Medicine, was recently published in the Proceedings of the National Academy of Sciences (PNAS). Its findings run counter to previous disease transmission models’ predictions—suggesting that habitat fragmentation may promote disease outbreaks in some scenarios.

The project explores the role of wildlife movement and the idea of “perceptual range,” or how far an animal can perceive habitat to be able to decide where and how to move. Scientists do not know much about what determines perceptual range for different species, but perceptual range likely scales with body size. For example, an elephant is expected to have a larger perceptual range than a snail.

“So many wildlife species are under stress from human activities like climate change and urbanization,” said White, lead author of the study. “This additional stress can compound the risk of an epidemic doing serious damage to already vulnerable wildlife populations. As we expand our reach into the environment, we are also increasing potential contacts between humans, livestock and wildlife. Consequently, we are at greater risk from zoonotic disease—pathogens that can transmit between animals and humans.”

“Understanding how animals move across their landscape is critical to predicting disease outbreaks,” said White. “Our model shows small changes in an individual animal’s movement can make a big difference.”

The findings highlight the potential role of resource hotspots and resource provisioning in altering not only animal movement patterns but also disease transmission. This makes it especially relevant to systems where humans are manipulating or supplementing the availability of food.

Another consideration for management is how humans conserve green space and keep habitat connected for wildlife. Critically, wildlife corridors allow for animal movement, migration and dispersal. However, from a disease control perspective, the study results suggest that the desirable level of habitat connectivity will vary for specific host-pathogen systems.